One night last year, Amy*, 17, was at a sleepover in Jackson with a bunch of her friends. In the middle of the night, one of the girls woke all the others, frantically accusing them of stealing her Juul and desperate for a hit.

Amy’s friend was not the only teen craving her vape and the nicotine it delivers with each puff. According to Heather Franklin, a substance abuse therapist at the Curran Seeley Foundation in Jackson, teenage vaping rates have continued to rise nationally since 2017. 2018 data from the Centers for Disease Control and Prevention and the Federal Drug Administration show more than 3.6 million teens, including 1 in 5 high school students and 1 in 20 middle school students, used some kind of e-cigarette in the month before the survey was conducted. And in 2019, the organization Monitoring the Future reported a 5.6 percent increase in vaping among twelfth graders, a 6.1 percent increase in tenth graders, and a 5.6 percent increase among eighth graders. Locally, there are no statistics on teenage vaping, but according to Deputy Andrew Roundy, the school resource officer for Teton County, Wyoming, there’s “nothing to suggest our numbers wouldn’t reflect the national trends.”

“The number one concern about vaping comes down to nicotine and the developing brain of a teenager,” Franklin wrote in an email. “Most vape juices contain nicotine, which is a very addictive drug … that changes the chemistry of the brain.”

Teens engaging in risky or detrimental behavior is nothing new, as even they, themselves, are quick to point out. They argue that vaping is much better than smoking cigarettes, drinking alcohol, or using drugs. They also argue that the stories about lung disease and deaths resulting from vaping are misleading. One teen, a 15-year-old girl who says she does not vape, mentions the fact that there have been just 54 vaping-related deaths and only a few thousand lung injuries among the millions of people who vape, which she says is an indication of how safe the practice is. She argues that since all the cases of vaping-related lung disease have been linked to black-market vaping cartridges, which can contain THC and vitamin E acetate, it’s wrong to use those stories to try to frighten kids about vaping nicotine.

Most teens get into vaping—and experimenting with drugs, alcohol, or tobacco—through their friends. Someone they trust offers them a puff off a vape and they like it. Many vape flavors are fruity and sweet, very different from the harsh taste of a cigarette, so teens enjoy them. Plus, they like the buzz they get from a puff of nicotine.

“My sister let me try hers, and after that I wanted one and never stopped,” says Tieryn*, a 17-year-old high school senior. “Now it’s something that gets me through the day. It makes me feel better. … I’ve quit before, but then I’m around people doing it and I do it again. I’m not going to stop until I am in a different environment—somewhere where I am happier and less stressed out.”

Tieryn admits she has had mysterious chest pains since she started vaping, and she says she has noticed that she’s less motivated to work out or get involved in extracurricular activities.

“The health stuff freaks me out,” Tieryn says. “Sometimes I get sharp pains in my lungs or am randomly short of breath when lying down. That scares me, but my need for it overrides that fear.”

“We all have stress, and we all have coping mechanisms for dealing with it,” Reynolds says. “It’s important when you talk to your kids to recognize that they are under a lot of stress. We can help give them ideas and possible solutions for coping with it that aren’t harmful.

“Kids can have a lack of awareness,” she says. “They are not invincible, but that’s hard for kids to understand developmentally. It’s hard for them to realize they are not immune, and what happens to one kid could happen to them.”

Curran Seeley works with the Teton County School District to deliver a prevention curriculum to fourth through ninth graders. The lessons, Franklin says, cultivate resistance and coping skills to manage pressures and emotions. At the high school, all ninth graders are required to take a health class that covers topics ranging from stress management to healthy relationships, sex education, and healthy eating habits. As kids progress through school, staff keeps an eye on them, looking for individuals who may need more support, but some students inevitably fall through the cracks. It’s the role of parents to catch this.

“Teens are vulnerable because of the many changes that they are experiencing in their bodies and their worlds,” Franklin says. “The key to stress reduction for teens is finding natural highs. Exercise, deep breathing, meditation, yoga, team sports, and social engagements with peers generate dopamine releases in the brain. These natural highs make a person feel good and calm. If a teen vapes, it will be harder for them to achieve a natural high because nicotine has overridden their dopamine circuitry.”

Rationally, most teens recognize that vaping is not great for them, but they are convinced that in the grand scheme of potentially dangerous things, it’s pretty harmless. Adults, however, are more worried. In addition to nicotine’s impact on a teen’s developing brain, researchers are concerned that some components in e-liquid, vape juice, or nic salts may become toxic when heated into vapor. Most e-liquids contain propylene glycol, a food additive that is generally considered safe for human consumption, or vegetable glycerin, which is typically made from soybean, coconut, or palm oil and is used in skin care, hair care, and other personal care products. The unknown factor is how heating these components and the additives that give vapes their flavors changes their chemical composition and affects people’s lungs.

“As a school administrator, talking to students caught with a vaporizer, we focus on the health aspect of what’s going on,” says Dan Abraham, the assistant principal at Jackson Hole High School. “What concerns me is there is a perception it is totally safe. But people should take it seriously. We just don’t know how safe these products really are.”

Of course, we all know most teenagers do not respond well to being told point blank not to do something, and so the challenge for schools and parents is to find a way to bridge the age-old generation gap to dissuade teens from vaping.

“I find the best tactic is to treat kids with respect,” says Deputy Roundy. “I try to treat them like a person. I hold them accountable for their behavior when they get in trouble, but it’s not my job to hammer them. I want to help them redirect inappropriate thought patterns and behaviors toward appropriate ones. Surprisingly, most kids really respond well to that.”

For parents worried about whether their children are vaping, professionals and teens agree the key is to start with a nonjudgmental conversation like the ones Roundy has with the kids who have been busted.

“Just be bold and start somewhere,” says Matthew Hoelscher, the principal of Jackson Hole Middle School. “You can’t be like, ‘Oh, we had the “drug talk” or we had the “sex talk,” and now we’re done.’ You have to have multiple conversations over the course of time.

“Start with something like, ‘I saw some kids vaping on the gondola and it kind of disgusted me; do you see that much?’” Hoelscher continues. “‘Has anyone ever offered you one? Are you curious about it?’ Once the conversation starts, it’s easier to bring up the topic. Our kids are trying to navigate a difficult world—whether it’s social media, sex, or whatever—and if we don’t have the conversation with them, they will seek it out elsewhere. We need to be brave and not be afraid of a hard conversation.”

Tieryn’s advice for parents is similar: “Get on [your kid’s] level and talk to him without anger. Sit down, have a heart-to-heart, ask him, ‘What can we do to fix this?’ But go slowly. It’s an addiction. … Parents have to be patient.”

* The names of the teenagers in this article have been changed to protect their identity. 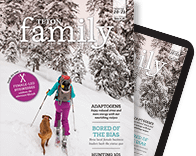