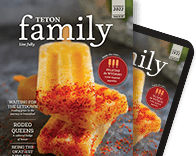 The Jackson Hole Art Association brings an irreplaceably rich cultural experience to Teton region residents. In addition to class offerings for adults, the nonprofit hosts summer camps that enrich the perspectives of our youth. Camps are held in July and August and vary in length from three days to two weeks.

This summer, the Art Association’s “Project Design Camp”—the longest and most rigorous of all its camps—was held for the second year in a row. Project Design Camp is a unique two-week collaboration with the Western Design Conference, a gathering that brings together artists, scholars, collectors, interior designers, architects, and fashion designers with a passion for the West. Throughout the camp, students entering grades 6 through 12 learn what it takes to create outfits that showcase their unique style. The process begins with mere sketches and ends with the creation of ensembles that debut on the conference runway.

Taught by Charley Develer and Henry Williams—who combine the perfect blend of structure with freedom—the class allows students to dive deep into their creative pursuits. The instructors push students to get their hands into all aspects of design, from idea to branding to making to modeling. As a class, the question isn’t “Can I do it?” but rather “What will it take to do it?”

Williams starts by having the students create a vision board that reflects their signature style, coming up with the name of their fashion house, and making a sketch of their logo. The teens are then encouraged to create three prototypes before they decide which one to take into production. Working with this template, students pair up to support each other in the design process. It’s during this time that they also build their self-confidence and leadership skills.

In the second week of camp, teams choose their favorite creations. Then they get to work constructing them. They pick their own materials, dabble with pattern making, and learn how to use sewing machines. Second-year student Marisa Corbett Simpson, 12, says, “I love seeing what I design on paper come to life with the sewing machine, though this is also the hardest part.”

Celia Ward, also a second-year student, agrees with Marisa: “Last year my partner and I designed a dress that was pretty tight down to about mid-calf and then fanned out. It turned out great, but the sewing part was much harder than I anticipated.”

Marisa had only fiddled with some small, hand-sewn projects before her first year of camp, so the entire process was a learning experience for her. “The camp gave me a desire to learn more about sewing and designing,” she says. “I look forward to doing more [of both] in the future.”

Williams explains that the biggest hurdles students face are the normal challenges that come up when they’re experimenting for the first time: sewing fabric together the wrong way, a seam that needs to be redone, a piece that doesn’t fit quite right. They learn patience, perseverance, and problem solving.

Despite the struggles, students complete 90% of the work by themselves, with just a little help and direction from Develer and Williams. “It’s exciting to watch two-dimensional fashion concepts take on a three-dimensional wearable form,” says Develer.

The camp culminates at the Western Design Conference fashion show, where the students present their work. The show pulls in designers from all over the country, but camp students are the only kids participating. The young designers add accessories, makeup, and hairstyles to their models before their pieces hit the stage.

“All the designs are truly one-of-a-kind,” says Western Design Conference Executive Director Allison Merritt. “It’s a special evening, as those attending the show also have an exclusive opportunity to preview and then buy the fashions directly from the artists.” A live auction before the show provides a chance to donate to Art Association programs like Project Design.