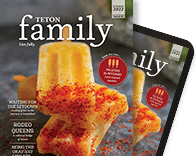 As kids, we all have special THINGS we cherish—unique (to us) things, weird things, and things that are even a little fun. There were things we looked forward to, as well as things we rolled our eyes at. Maybe we were proud of these things, or a little embarrassed by them, or maybe we didn’t even see them for what they were. But these are the THINGS that define the memories of our childhoods.

When I was a kid, I spent a lot of time in the Northwoods of Wisconsin where my dad conducted field research and taught at a wilderness field station. We lived out of tents, took long backcountry trips; we bushwhacked, canoed, and explored. I learned to feel at home in wild places (I still do). It was our THING.

When Margaret—my partner in the balloon magic—was a kid, her uncle flew hot air balloons. They traveled to events and knew other pilots. Margaret learned how to crew and fly. She obtained her pilot’s license before she graduated from college and bought a new balloon, towing it behind her beat-up old Ford. It was her THING.

I met Margaret over coffee in February of 2012, upstairs at MD Nursery in Driggs on one of those days when the snow blows sideways. We had an immediate connection, which served us well as we picked up the pieces of a local tradition that seemed to have been dropped on the floor at our feet. We collected the pieces, brought it back to life, and built a new take on a THING that really matters.

A trail of headlights glowed down Hwy 33 in Driggs at 5:45 a.m., poured onto the gravel road, and pulled up to the field. People peeled themselves out of their cars, coffee in hand, sleepy kids wrapped in blankets, cameras out … . Smiling. Chatting. Ready. When the gentle giants rose around me for the first time—I was floored.

This was someTHING. This was amazing. This was AWEsome.

We planned and hosted the Teton Valley Balloon Rally again the next year … and the next … and then the next. We collected a family of supporters who—through contributions of time, talent, patience, and dollars—held us up and pushed us forward. We met families who returned year after year. Some people had come to the festival back when they were kids, and now it’s their family tradition. We met grandparents, who had attended as newlyweds, watching their grandchildren play in the balloon field.

A local kid named Seamus O’Connor volunteered with his family, as part of a crew, on rally mornings. He was focused; he was fun; he wanted to learn. Seamus caught the bug; he felt the tug that comes from being a part of bringing the nylon giants to life. He gave us an idea.

Four years after I saw that first row of headlights on the highway, we formed a 501(c)3 non-profit organization, created a scholarship with the money we made selling t-shirts and balloon rides, and sent Seamus to the Balloon Federation of America’s Youth Balloon Camp. Seamus was our little organization’s first “balloon kid.”

And there are more.

Every year we talk to a couple of wide-eyed youngsters who are full of questions: How does it all work? What does it take to fly a balloon? How can I be a part of this THING?

These are the balloon kids—the future of this magic. Our scholarships and educational programs are designed to make sure kids’ questions can always be answered, and that Teton Valley is a welcoming space for young people who want to take to the skies.

Every summer, the folks on the north end of the Teton Valley anticipate the roar of a propane burner, knowing a balloon might land in their yard. After all, hot air balloons in the western skies are synonymous with summer. For many, it’s the way it’s always been. The balloons matter. But why?

What was it that made the colorful giants tug at my heartstrings?

Maybe it’s because we live our best lives when we are able to experience awe. I have only begun to discover the depth of this truth. I had the opportunity to experience awe in my childhood, so when I found it as an adult, I knew how to grab it and hold on. That’s the power of awe. It’s the goosebumps, not from the remnant night’s chill, but from that first roar of flame leaping skyward through the last call of darkness. It’s the way you breathe deeply, feeling the dancing air as the vibrant colors begin to swell. It’s the rough pull of the rope through your gloves as you restrain a growing giant. This magic is my THING. The sense of awe and wonder—the push toward something bigger. It matters.